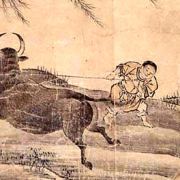 It’s horrible what we see and hear about the current condition on this planet. Climate change affecting humans and other beings. We see and hear of sentient beings suffering in different parts of the world, and we feel for them—the heart, chest area, and stomach area tightens.

Looking for a cause

If something is disturbing us, we are usually very fast in looking for a cause. Maybe we want to get rid of this cause in order to ease our unpleasant feeling. But here the cause is not so easy to recognize. Zen Master Seung Sahn once said, “if you see horns behind a wall, you know there is a bull”. However, with this situation, it seems like we just quickly see a tail in the air for a short period of time. As soon as you point a finger at it, suddenly it’s gone again. That is why these days, it is important to uncover “keen eyes” if you are trying to spot signs of the bull. A good way to do that is through what we often call “practice”.

We hear about different causes for our situation. This research says this and that other scientist says another thing. One says it’s already too late, and the other one says we have time. So we often decide on our preferences which one to follow. A scientist says: It’s the fault of this politician and that one. Or it’s the fault of these big companies, and they decided in the year so-and-so to do this and that. Now we have the result of their action – it’s their fault.

The root cause inside

Now this subject has become a little easier, less heavy, and less of a burden because we think we found the cause. Now, we know. We might get active or become activists for this cause or another cause. But as long as we don’t find the root cause inside – the cause that created all this in the first place and continues to do so – we won’t really change much, but rather prolong the problem. If we manage to save this planet or future homes, will it not start all over again?

If we look closely at the killing of this planet and the sentient beings, we can see that there is not much difference between the killers and us. We all are so much connected with each other in this world, that in fact we truly are the killers of this planet. No matter how active we might be in the environmental movement. This may be unpleasant to see, but please go along with it for a moment. There is a kong-an that comes to mind: One day Hyo Bong Sunim asked Zen Master Man Gong, “Somebody likes to kill. Who is the best killer?” Man Gong Sunim answered, “Today, I see him here.”

Can we see without an immediate objection and protest from within? And what is it, that’s protesting? What’s in the way? As soon as the “I-my-me” pollution gets active, we are separate. We make and have “you” and “me”, “life” and “death”, “peace” and “war”.  Can we see this right now—maybe while reading this? Through seeing, it may drop away by itself. Then what remains? What is it?

The monk in the kong-an doesn’t stop but asks Man Gong Sunim: “I want to cut your neck. Do you give me permission?” Then Man Gong Sunim gave a beautiful answer that pierces the root. What did he say? What’s your answer? Can we live this answer from moment to moment for the next 10,000 years?

Living on our little “sub-planets”, on our work planet, on our environment planet or our zen planet is not good or bad and definitely soon over. We are so much more connected with each other than we think. Nothing can take this away from us. Let’s bring it here and help this world.

Illustration: Tenshō Shūbun: Getting Hold of the Ox; Shōkoku-ji-Temple, Kyoto. © Creative Commons. – This is one of a series of ten images, generally known in English as the Ox-herding (or Bull-herding) pictures, by the 15th century Japanese Rinzai Zen monk Shubun. They are said to be copies of originals, now lost, traditionally attributed to Kakuan, a 12th century Chinese Zen Master.

This site uses cookies. By continuing to browse the site, you are agreeing to our use of cookies.

We may request cookies to be set on your device. We use cookies to let us know when you visit our websites, how you interact with us, to enrich your user experience, and to customize your relationship with our website.

Click on the different category headings to find out more. You can also change some of your preferences. Note that blocking some types of cookies may impact your experience on our websites and the services we are able to offer.

These cookies are strictly necessary to provide you with services available through our website and to use some of its features.

Because these cookies are strictly necessary to deliver the website, refuseing them will have impact how our site functions. You always can block or delete cookies by changing your browser settings and force blocking all cookies on this website. But this will always prompt you to accept/refuse cookies when revisiting our site.

We fully respect if you want to refuse cookies but to avoid asking you again and again kindly allow us to store a cookie for that. You are free to opt out any time or opt in for other cookies to get a better experience. If you refuse cookies we will remove all set cookies in our domain.

We provide you with a list of stored cookies on your computer in our domain so you can check what we stored. Due to security reasons we are not able to show or modify cookies from other domains. You can check these in your browser security settings.

We also use different external services like Google Webfonts, Google Maps, and external Video providers. Since these providers may collect personal data like your IP address we allow you to block them here. Please be aware that this might heavily reduce the functionality and appearance of our site. Changes will take effect once you reload the page.